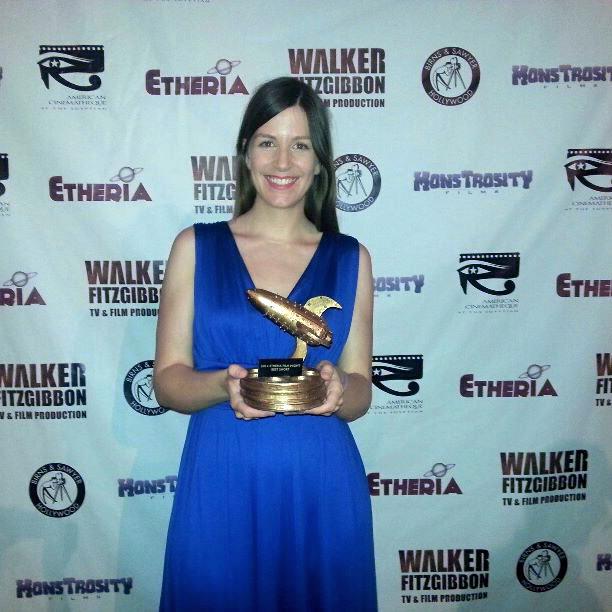 On July 12th, the Etheria Film Night invaded the American Cinematheque in Hollywood Boulevard, Los Angeles to celebrate emerging women genre filmmakers.
Proving once again that genre fiction has no gender, the event showcased the short films of seven directors and the american premiere of Axelle Carolyn’s supernatural drama Soulmate.

Three awards were presented that night: The Audience Award to Sarah Doyle’s short You, Me & Her, the Best Film Award to Julia Walter’s thriller Job Interview and the Inspiration Award to director and screenwriter Lexi Alexander for her body of work and advocacy for equality in the entertainment industry.

Sarah Doyle – Audience Award for You, Me & Her 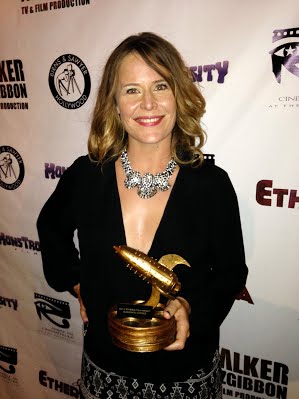 HWN: What is the concept behind You, Me & Her?

SD: The concept is absurdly literalizing the Copenhagen theory of quantum physics. In a nut shell, a girl named Anna gets taken to the US Department of Parallel Resettlement where she finds out 30 versions of herself from other universes have been sucked through their wormhole, and it turns out every version is better than her. So it’s playing on the basic fear of obscurity and banality but charging that with the highest stakes imaginable – ie. the least interesting version in the entire multiverse, and the destruction of our universe contingent on her continuing that pattern of lameness.

HWN: You went from being a playwright in Sydney & New York to directing films in Los Angeles. How did that shift happen and what have you gained from the AFI Directing Workshop?

SD: The shift happened in 2007 in LA when I got the opportunity to get the O1 visa — which meant I could work legally in the US in the performing arts. I wasn’t sure if I’d stay in LA or what would happen but quite naturally I started to fall in love with this great city and also become more interested in directing film and writing for the screen rather than only for the stage.
Little did I knew the stage and the screen are second cousins thrice removed. It took five years before I felt in my skin with writing in pictures. Screenplays need an air-tight structure where you have to be so economic with your words and always active and visual in your storytelling. That — and opportunities to make work — don’t happen overnight. AFI’s Directing Workshop for Women taught me a heap about the many facets of filmmaking in a short amount of time. It also gave me a reason to make a pretty ambitious short. Beyond that it empowered me, which is a feeling hard to quantify, but so important if you really want to direct.

Watch the trailer of You, Me & Her on Etheria Film Night – Movies & Directors
Discover the workshop where Sarah Doyle developed her movie on Directors & Films of the AFI Directing Workshop for Women 2013 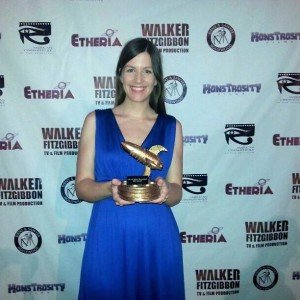 HWN: How did JOB INTERVIEW come together, what was your inspiration?

JW: JOB INTERVIEW actually is the result of a three weeks seminar called “Working with Actors” in my film school in Munich, Germany. As I wanted to shoot something in the actual film school building I was looking for a story that would take place in an office environment. Also I wanted to create a drastic change within a very short time and then suddenly this idea came to my mind of two ladies in a room doing a job interview that gets very creepy… Well, I had a vague idea what I wanted to do but still I struggled getting it written down on paper.
So I called my producer from ROVOLUTION FILM and he told me not to worry and have a coffee at their office instead. Then I made a commitment to myself to use the 10 minutes ride on the subway to write everything down I knew so far. That’s what I did and when I arrived at my producers’ office I was all smiley and told them: “I have something here that probably interests you.”
And they were interested indeed. After that writing the screenplay took me another night but the story was “born on a subway”.

HWN: The film has been well received in festivals… What’s next for you?

JW: I almost can’t believe how well it was received. Keep in mind that it all started out as an exercise of a seminar! We’ve been to Cannes to represent German short films and won a couple of awards including festivals in New York and Hollywood. JOB INTERVIEW is still on the festival circuit.

In the meantime I directed a short film comedy written by screenwriter and film school colleague Sina Flammang called “Garden F(R)IEND” which is a story about a grandmother who tries literally everything to prevent her teenage granddaughter from growing up. (www.gartenfeind.de)

I still have another year at film school ahead of me and right now I’m developing several feature length films together with ROVOLUTION FILM as I came to enjoy writing scripts myself a lot!

HWN: What prompted you to speak up about the under-representation of women in the film industry?

LA: I wrote a script about a female computer coder and while I was researching it I came across the discrimination issues women in STEM are facing.
But while those issues sadly still exist in those fields, there are also very prominent male voices who publicly state their concern about the lack of women’s point-of-view in fields like physics, engineering, computer science, etc.
A light bulb went off in my head and I realized that we have not a single, prominent male voice who shares the same concern for our industry. I find it unbelievable that science is more concerned about the consequences of a vision that is predominantly male than Hollywood.
So this is what spiked my curiosity and made look into gender equality in Hollywood. What I found was unbelievable. The stats we have here in Hollywood are no accident nor are they caused by a problem that people simply don’t know how to solve. This is a dog-eat-dog world and now they have the advantage of the pack as well.

HWN:As you received the Inspiration Award, let’s turn to your own influences. Who inspired you as a filmmaker, from the beginning of your career to today?

LA: In Germany a woman named Dorris Dörrie made a movie called MEN which I loved, in retrospect I am grateful that she was on my radar because you can’t be what you can’t see.
Today it is without doubt Euzhan Palcy who inspires me the most and who is my personal heroine. She’s also a director who had to consistently prove that her talent is not a coincidence and that she is a born storyteller.
I hope we get to see many, many more films from her, otherwise history will look back at us and wonder what the hell was wrong with us.

Find Euzhan Palcy on the Hollywomen Directors Board

HWN: It was not your plan to direct Soulmate at first, just to write it. What prompted you to take matter into your own hands and make it your first feature film?

AC: Growing attached to the script was the first thing. As I was writing, those characters, and what happens to them, felt increasingly closer to my heart, and I didn’t want to hand them over to someone else. We talked to other directors, but it turned out too hard to let go. The other thing is, making movies has always been my plan, I just hadn’t felt ready to do it yet until then.
I’ve worked in film PR, in production, briefly as an actor, as a film reporter, and I’ve been writing scripts for 15 years, but with the exception of a couple of silly shorts in high school, I’d never directed anything. But from the time I decided to make this my first feature, I’ve directed five short films and written another feature, so I felt much more confident once we finally got the money together.

HWN: The movie stuns by its remarkable cinematography. How did you find yourself working with cinematographer Sara Deane, can you tell us more about your collaboration?

AC: Sara’s wonderful! She came on board pretty late in the day, when the cinematographer we’d hired decided to drop out, which turned out to be a real blessing in disguise. I drove my producers insane because even though we were weeks from the shoot, I didn’t want to settle for anyone I wouldn’t trust 100% and be on the same wavelength.
I found Sara’s showreel online, by pure chance, and loved every bit of it. She was available and interested in the script, so we met the following day, and luckily, she also turned out to be one of the coolest people I’ve met.
She can leave behind the technicalities to talk about how to best convey a theme or a mood. The crew shared accommodations at night during production, so every night after the shoot we’d have a good chat, plan for the next day, reflect on what worked or didn’t work.
She’s my first choice for any project I direct from here on out! 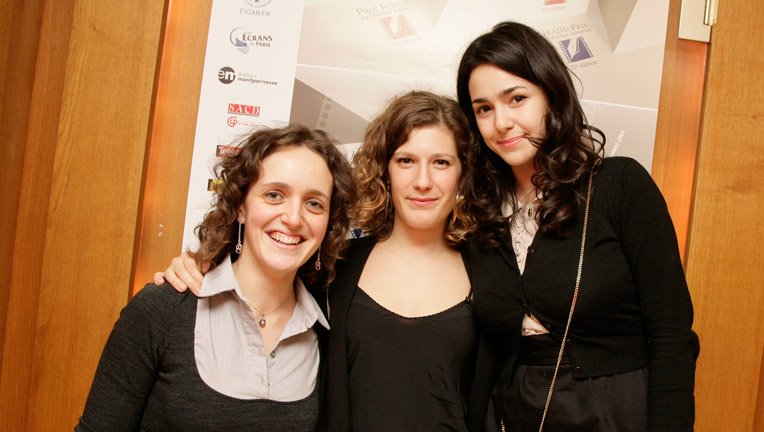